According to Edith Reiter's 2014 book, this instrument was completed on 19 February 1907. Howe & Hurd (2004) describe heckelphone #33 as a model 36b. It was initially acquired by Robert Sauer, professor of music of Brigham Young University in Provo (UT), USA.

As of 2020, it was reported to belong to Chris Bleth, a studio musician in Sunland (CA), USA. According to Howe & Hurd (2004), it previously belonged to John Clark of Studio City (CA), USA, and prior to that to bassoonist Don Christlieb, who loaned it to colleagues for use in movie soundtracks, including Gone with the Wind and Laura; this instrument was also used by John Ellis in his famous 1975 recording of the Hindemith Trio, opus 47.

The first owner of heckelphone #33 Prof. Robert Sauer of Brigham Young University in Provo (UT), USA, who performed on it a piece for heckelphone and organ, on 16 October 1907, during Founder's Day festivities. Interestingly, Robert Sauer lived and worked in Dresden, Germany, prior to emigrating to the USA, and likely had knowledge of the heckelphone due to ongoing connections with musicians there (Richard Strauss's opera Salome had been premiered on 9 December 1905 in Dresden and was the first major piece to prominently feature heckelphone). Robert Sauer died in 1944; Don Christlieb, the next confirmed owner of heckelphone #33 was 32 years old at that time, and therefore quite conceivably acquired it directly from Robert Sauer or his estate.


Heckelphone #33 can also be heard in the soundtrack of Gone with the Wind.

A picture of heckelphone #33 with its first owner, Prof. Robert Sauer (likely taken ~1910): 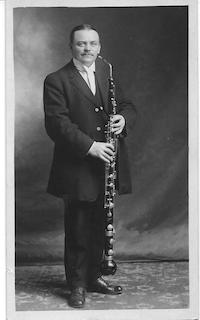 Many thanks to Peter Hurd (USA) for providing some of the information shown on this page. To provide further details on the history of this instrument to be included on this page, please contact me at heckelphone@gmx.net.