According to Edith Reiter's 2014 book, this instrument was completed on 30 May 1925 and originally sold to a buyer in an unknown location.

Howe & Hurd (2004) describe heckelphone #3916 as a model 36b. In the late 1990s, the instrument was adjusted from the original, high tuning pitch of A=452 to A=440 by noted oboe maker Thomas Hiniker in Minnesota, USA, who also converted it to a semi-automatic octave mechanism, made some minor alterations to the bore to further improve its acoustics, and made a new "Hiniker" bocal. In late 2021, Keith Bowen of Port Townsend (WA) carried out a restoration with new silver plating (up to that point, very little of the original nickel plating had remained intact), re-installed the automatic octave mechanism, improved the ergonomics of the two side keys (for Bb and C), and applied minor touch-ups to the original wood finish.

As of February 2022, this heckelphone is located in St. Paul (MN), USA, and owned by professional bassoonist Justin Windschitl, who acquired it in mid-2021 from Thomas Hiniker, a noted oboe maker and professional oboist in Minnesota. Hiniker purchased the instrument from Lewis Kirke of Council Bluffs, Iowa, in 1995, who in turn had acquired it from the estate of Jimmy Caton from South Dakota. Caton, a traveling musician and booking agent, took an interest in heckelpone #3916 in the 1930s, when it was on display by the Conn-Selmer Company of Elkhart, Indiana, and ultimately acquired it in 1934; he played it regularly until he passed away in 1990. It is likely, but not entirely certain that this heckelphone was purchased by the Conn-Selmer Company directly from Heckel, as a showroom display instrument.

Heckelphone #3916 has been routinely used in the Detroit Symphony and Minnesota Orchestra; as of early 2022, it is in excellent condition and played regularly. 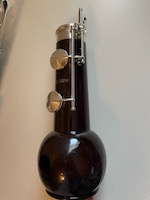 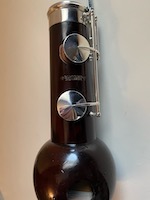 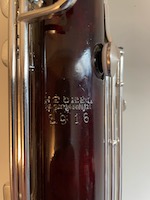 Many thanks to Justin Windschitl for providing most of the information as well as the pictures shown on this page. To contribute further details on the history of this instrument, please contact me at heckelphone@gmx.net.