According to Edith Reiter's 2014 book, this instrument was completed on 12 November 1928; it is a model 36i (a precursor to the conservatory system) with a one-piece bell.

As of June 2020, heckelphone #4055 is owned by Indiana University in Bloomington, Indiana (USA).

The instrument was donated to Indiana University in 1980 by Robert J. Tootelian of Chicago, Illinois (USA). As a master of woodwinds, Tootelian played more than 10000 performances in more than 100 musicals (by his count) at Chicago's Shubert Theatre. He played the baritone sax on the Crew-Cuts' 1954 hit "Sh-Boom." In 1976, when the Shubert Theatre took a break for a few months, Tootelian toured with Frank Sinatra, helping him warm up before each performance. Over the years, he also recorded many commercial jingles, including a long-running Green Giant commercial, in which he is heard playing three prominent low notes on the bassoon.

It is unknown who owned heckelphone #4055 before Robert Tootelian, but based on a stamp on the top joint, it has likely been built for a customer in the USA.

This instrument is in regular use (mostly by oboists for performances of Richard Strauss's Alpine Symphony) and in very good condition. 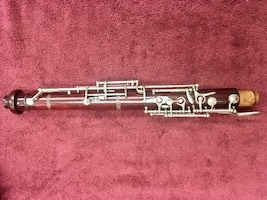 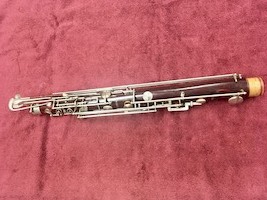 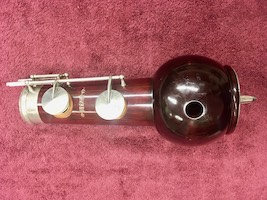 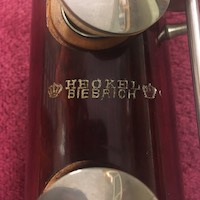 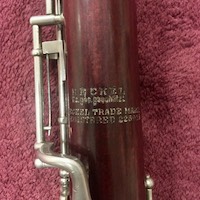 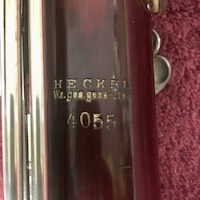 Many thanks to Ronald Sebben, Emily Krajewski, Linda Strommen and Chris Raphael from Indiana University for kindly providing much of the information and the pictures shown on this page. To provide further details on the history of this instrument to be included on this page, please contact me at heckelphone@gmx.net.